Even in the rain, the nearby town of Kamakura makes for a great escape from Tokyo. Just under an hour away by train, this town is known for its impressive array of temples and more laid-back rural feel.

From Kamakura station, I took the rather quaint Enoshima Electric Tram to Hase station to start temple-hopping. I started off at Hasedera, which is famous for having beautiful grounds and thousands of tiny statues of Jizo.

Near the entrance of the temple complex, you can clamber through a tunnel to a system of small caves in the hillside, where statues of various gods have been carved out of the walls. 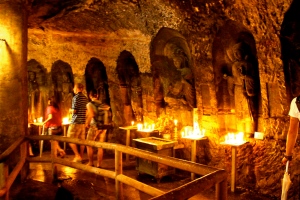 Even smaller statues are placed next to some of them: 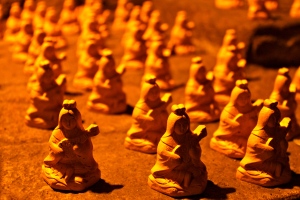 It was all absolutely stunning but quite poignant too – Jizo is the patron of departed children and most of the statues have been left by women who have lost children through miscarriage or abortion.

The main temple houses a 9m tall, gilded Buddha (of the standing, skinny variety), but I wasn’t allowed to take photos inside, so here’s one of the outside for you.

After wandering around the Hasedera grounds for a while, I headed off to Kotoku-in, which is famous for its giant bronze Buddha (this time sitting down and chubby).

I also climbed inside it (from under his bum) to see what he looked like from the inside. Unsurprisingly, it looked like an inside-out, bronze Buddha. It was from this temple that I tried to join the ‘Daibutsu Hiking Course’. I thought that this would be a nice woodland path that meandered through the hillside forest, connecting the temples and shrines. How wrong I was.

The ‘Daibutsu Hiking Course’ is aptly named – it should definitely not be attempted late in the afternoon, after heavy rain, while wearing plimsoles and carrying a rather large handbag! The part of the hike from Daibutsu to the nearest temple was supposed to take 20 minutes – it took me the best part of a hour. The path (if you can even call it that…) went steeply up and even more steeply down, was covered in inch-thick, very slippery mud and pretty much felt like I was trekking through a tropical jungle. And, warning (!), the signposts are only in Japanese.

The first temple that you reach on the course is Sasuke-inari jinja and can be spotted by the red torii (gates) leading up the steps. The temple grounds stretch into the forest and contain hundreds of statues and figurines of foxes. 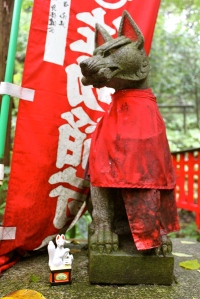 I then headed, on the main road this time, to Zeniarai-benten. I entered this shrine complex through a tunnel in the hillside which opened out into a gorgeous clearing. This shrine is famous for its natural springs, which run out through caves under the hillside. 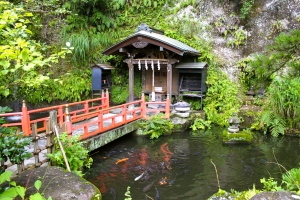 Collect some candles incense and a basket from the main building and head into the caves. Then pop your loose change into the basket and give it a good rinse in the river that runs through the cave. It’s believed that if you wash your money in the springs and then spend it, it will return to you many times over. Here’s hoping!

How to get there: take the Yokosuka Line from Tokyo Station to Kamakura Station.

Holly’s Top Tip: if you’re a fan of flowers, schedule your trip for the end of June/beginning of July when the hillside at Hasedera will be covered in the most amazing hydrangeas in every colour.